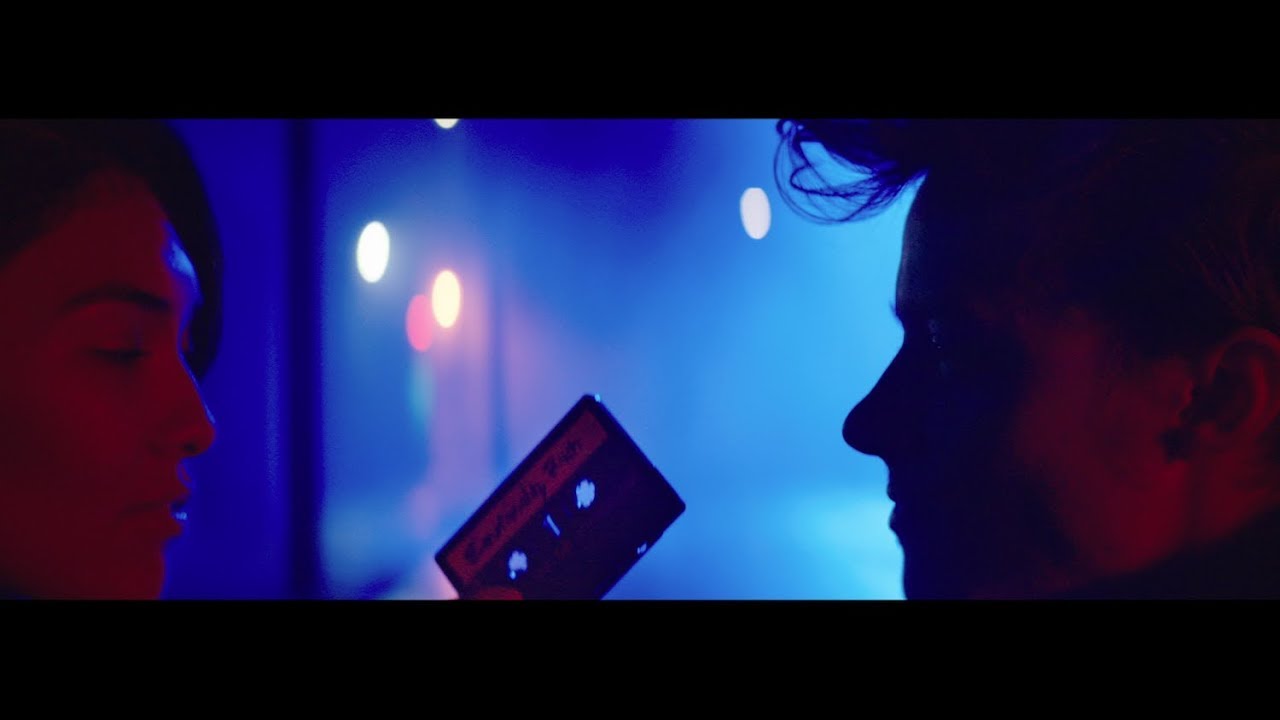 One of the best song.

When will you get enough time Matt?


When Terry unplugs the game, assuming Matthew is bad at this point, Matt realizes something is off. He rewatches the events of Pressure through his VR glasses at the beginning of Something Human, to try to find out who else could’ve hacked the system. He realizes he needs further proof to enlighten people, so he decides to take the tap to the Retrograde Video store, where he either stores his proof or something like that. On his way, Law Enforcement ( Dom and Chris, who seem to be reprogrammed). He hacks into the system in the Dark Side, while trying to be stopped by the Creator through gigantic hands and stuff. Because Matt isn’t a typical human, he can transform himself and fight his way through.


Meanwhile, the survivors inside the school are losing themselves, becoming part monster (as seen in Break it to Me). The only survivor to make it out alive and survive is later attacked in the Thought Contagion video to shut him up (I believe this is before the events of Something Human and the Dark Side, as Matt had made finding the kid a priority until the game was unplugged by Crews) He had seen too much. Whether he made it out alive or not is still under question, but Matt is definitely looking for him.
Brandon Davis 11 ноября 2018 года в 22:11
Leyla ALIYEVA lol it is possible were just looking way too deep, but at the same time muse has never had videos correlate like that before so we'll just say it's a story, and 100% agreed, we need something all the "closing videos" that being algorithm, dig down, and the dark side all leaving us at a cliff having no idea what happens after that so hopefully we'll get some more videos to finish up and tie the story together
Leyla ALIYEVA 11 ноября 2018 года в 21:39
I sometimes think Matt, Dom and Chris didn't really put as much thought into this and I overreacted and made up a story, but I hope they actually are related and that they give us another video or two that correlates the stories a bit more. The boys mentioned alternative universes, so maybe Dig Down is in an alternative, more dystopian, 1984-ish universe of the Simulation, but Matt has accessed it by breaking into the system.
Brandon Davis 10 ноября 2018 года в 17:04
Leyla ALIYEVA good thoughts, this has honestly been my favorite part of this new album aside from new music obviously is the super vague story leaving it up to us, the fans, to put the pieces of the story together and it's been a lot of fun this video to me seems like the conclusion, closing the book on the final chapter leaving the end up to what we imagine
Abad Briman 21 ноября 2018 года в 07:00 23
This is how MUSE say:
-Here you have, we can still do Origin of Symmetry stuff.
Now shut up and let us continue experimenting...
Jake Doze 16 января 2019 года в 23:47
@Abad Briman - You should know that Blockades is an 80's adaptation of your Ocean Etude Mr. Chopin !
Abad Briman 04 декабря 2018 года в 19:34
+antoine bibi Wow, looks like you are a good listener. Recently I uploaded a video talking about the song Propaganda... and as I can read on your opinion, you would probably like my vid.
It's in the next link if you want to ckeck it out. Thanks :)
https://www.youtube.com/watch?v=5Rrlle1KtfI
antoine bibi 02 декабря 2018 года в 13:12
and experimental things are here purely a joke, there's nothing new, only a soft japan rock polished for supermarket and toilets
antoine bibi 02 декабря 2018 года в 13:10
that's not even similar to origin of symetry. rhythm here is boring as hell, no musicality, good intro and solo anyway.
mugensamurai 09 ноября 2018 года в 14:09 66
When Muse makes a music video of their own music videos. Mind blown.
Октавиан Август 11 ноября 2018 года в 13:55
And makes a song that contain a couple of their previous songs.
Madd Snork 12 ноября 2018 года в 23:08 25
Why do people always have to compare new Muse songs to old ones, and to compare Muse to some monarchical band? Muse is Muse and all their songs are unique.
Jake Doze 16 января 2019 года в 23:48
Well this song is pretty much Chopin's Ocean Etude
Hacharma213 19 ноября 2018 года в 15:25
I agree.
David 12 ноября 2018 года в 23:20
i agree
Ricardo Pinho 10 ноября 2018 года в 18:50 74
This album could set a new standard for what albums can be. In the old days albums were made when a band had enough successful singles that they would compile in an album. With the music industry growing, bands begun launching albums alone all together with 9, 10 songs alike., the 2nd and 3rd song would be the hits and the rest would compliment the album. But overall the albums were pretty dull. This Simulation Theory is like looking at painting and imagining what it can represent. There is so much sounds, progressions, little variations and bits of information directing to others 'paitings'. I can't even explain... But the richness and unpredictability, variety embraces so much you can tell this isn't ordinary piece of art. I wish more bands would follow this tracks as Beatles were followed back then. Let's rewrite what music is. A form of expression you can take wherever you want.
TheKyotie25 03 января 2019 года в 02:16
Gray Bull there so much more to it then you think
Gray Bull 29 декабря 2018 года в 08:18
So you're describing what a concept album is...Muse didn't reinvent the wheel with this, it's just a pretty decent album and that's it.
Desktapper 25 ноября 2018 года в 10:59
Ever listened to meat loaf?
TheKyotie25 12 ноября 2018 года в 04:49
Ricardo Pinho you get it!!! I’m still trying to understand the storyline/ concepts explored in a manner that allows me to understand the deeper understandings if this album
Dennis Lee Kwan Yen 09 ноября 2018 года в 11:33 38
This is the sequel to Black Holes and Revelation
Jake Doze 16 января 2019 года в 23:49
This is an hommage to Chopin's Ocean Etude
Destiny Of Suburbia 25 ноября 2018 года в 23:59
Black Holes and Simulations
Tiffany Bellamy 09 ноября 2018 года в 11:08 73
Esta me recuerda más a nuestro clasico MUSE.

Trapped in a maze of unseen walls
These blockades must fall

Trapped in a maze of endless walls
These blockades must fall

Trapped in a maze of unseen walls
These blockades must fall

Trapped in a maze of endless walls
These blockades must fall

First of all we need to remember that the album is called Simulation Theory, and thats important cause we need to split what is the "Real World" and "What is the Simulation"
Like Matrix, at first we think the world like ours is the Real One, but here is where this theory start

Our story beggins in "Pressure", when the Muse Members put the VR Glasses On, like Ready Player Number One, to enter in the simulation, the simulation is the "World like ours" and we are in a prom, nothing really interesting happening until the couple hit the computer and activate the "Laser ray thing" to transform the little animal in the Critter
At this point we have people living in a Simulation (And it will be confirmated in Algorithm) and Terry Crews is a Professor that have some bizarre research that collpsed the Simulation, creating a bizarre creature (the critter), that act like a Virus and infect all the "Programs" in the simulation, then people start transforming in the "Vampire things"
Terry Crews show us that he really knows something about his reallity and was researching for the true

Right after Pressure we have some people trying to hide whats happening, and then starts "Break it to Me", with people transforming cause they got infected by the Virus. "Thought Contagion" happens after that, now the virus is spreading in all the simulation, and the "Anti-virus" appears to be more prepared, it suggest that they always have been studying what could happen, so they try to act fixing the Simulation by taking off the street the infected ones (It remember me Agent Smith from matrix, that act "correcting bugs in the simulation")

Then starts "Something Human" with Matt in the "Real World" taking off his VR Glasses and traveling with the "Program" of the simulation, that he put in the box of the Retrograde Video. I really don't thin Chris and Dom are interested in what Matt carry in his car, they are just being "Police man" in something like a after-apocalipse world, then the cars choke each other and Matt cross a Portal to another "Reality" and transforms into a Werewolf. Dom and Chris find Matt with a "Phone Box" that can travel through realities (We are in Muse or Doctor Who?), which suggest that people outside the Simulation developed the tecnology to travel through different dimensions (Matt with his car, Dom and Chris with the Phone Box). In the end of Something Human, Dom is attacked by a thing like Matt, an Werewolf, at this Point I think we have the "Werewolf reality", where the Retrograde Video is, the "Humans Reality", where Chris and Dom come from, the Simulation, that we saw at the start, and now go to the Darkside.

Coming back to the Simulation, we have "Algorithm" with Terry Crews talking with the "Simulation Central Controler" from his computer, and confirming that they are in a Simulation. After that he starting looking some way out to discover the Truth, and fuse his Program DNA to the Critter DNA, cause for he is the only way yo break the code and get out. He developed a Portal to get out of the simulation, but one important thing here is that we have no idea of who was talking with him in the computer, it could be the own "Central" giving a chance to take him out, but I think who's talking is the same that inserted the "Critter Virus" in the simulation and give the "Algorithm" to Terry get out of there. The verse "This means war with your creator" suggest that when he come out, they start a War with the Central, cause they are the "Creators of the Simulation Reallity". The place he go after cross the portal looks like the Dark Side, so Terry are in the same place that matthew was the last time we saw him, and we find the game that Terry Turn of and "End the Darkside simulation"

If we lookback in the start of the video, in Terry wall we have a lot of newspapper, which suggest that all of what happened in Pressure and after was sometime before that, so here's what I think it happened:
- The Critter Virus infected the Simulation, Matthew saw everything and try to take the survivors out of there, so he go to the Darkside
- The Central trapped Matt and transform he in a Program inside the Simulation, then use he's image to convince people that everything is okay and they are taking care of all, we saw that in "Dig Down"
- Not convinced by the "Government message", Terry try to contact someone out of the Simulation, and then he discorver the true. The one who send the messages to he, in my point of view is Matthew trapped by the Central, he is part of the simulation now, so maybe he could transfer a message to someone he's sure that gonna save then all
- Terry finish the simulation by turning off the Game.

I honestly had no idea if I should even put this in it though, as sad as it makes me, I might leave it out because the video doesn't have an identity of its own.

Trapped in a maze of unseen walls These blockades must fall

Trapped in a maze of endless walls These blockades must fall

David Friedman Generations Quartet — All I...