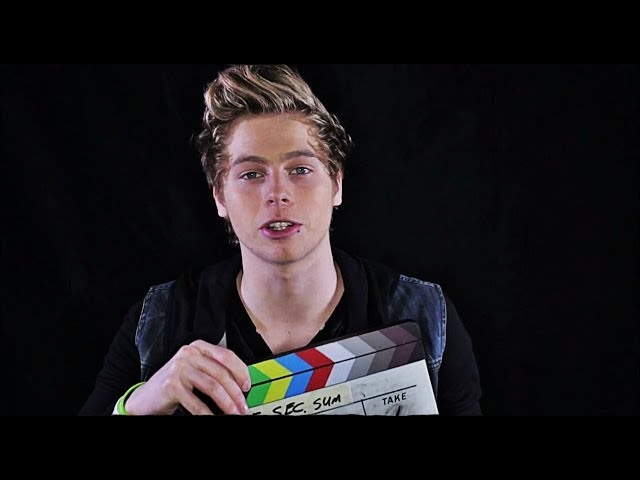 Almost two years ago on the 3rd of December 2011, we came together and formed 5 Seconds of Summer. We’ve been working on some EPIC stuff for #5SOSBDAY while we’ve been in LA & decided to make a couple of videos about each of us and what it’s like to be in a band together !! This one is about..... LUKE HEMMINGS :D

5sos on luke
Calum: in the back of my head i knew luke was a really cool guy

AWE! IM GLAD THEY DIDNT KILL EACH OTHER

I swear that was so cute.

I hate that I only discovered these guys in 2014 :( but I still love them so much and my love for them is beyond compared and nothing anybody says to me about them can ever tear me away from them. I'm overly attached and obsessed in a non-creepy way and I went through about 5 years of their tweets in less than an hour, so that I could catch up on everything and I may seem like a bit of a stalker doing that, but in my mind, I'm not a stalker, I'm just obsessed. <3

All I want is to be noticed by the boys and tbh, I don't think they even see any of my tweets, cuz like, every time something happened to Mikey, I tweeted him to make sure he was okay and whenever something big happened with the boys, I would tweet them and congratulate them, but like, people tweet them everyday, 24/7, saying things like, "Fuck me daddy." and other off-putting stuff like that and that's probably why they don't read our tweets very often and they mainly just get tweets that are so simple.. They just say things like, "ily" and "will you marry me ?" and "i <3 u", etc.. Like I understand them not having time to read all the tweets, because of the endless tweets saying simple things, like the things listed above and omf, I just wanna be noticed by them.. I've never been to a concert for a celebrity or anything before and I really want to meet 5SOS more than I want to do anything else in life and omf, like I might be going to one of their concerts next year and I'm desperate to and I've basically put the past year or so of my life into these boys and tbh, it's a great feeling to do such a thing. <3

I ship Muke, like so hard and I just honestly think they're perfect for each other and this video proves it. The fact they became best friends all of a sudden and now they're in a band and have been for a few years and they've gotten so far and omf, I couldn't be more proud of them, but seriously though, they've now been together through thick and thin and all of the boys are there for each other all of the time and it makes my heart melt and I feel so happy and proud, like omf, I can't tame myself !!! <3

~My life as a fangirl~

I wake up every week day to go to school and when I'm bored or sad or alone or depressed at school, I think about the boys or talk about the boys or sing one or two or more of their songs and it makes me happy and like, I fangirl about them so hard, like 24/7 and when I get home from school, I immediately go online and see what they've been up to and I talk to my online friends about them and we just fangirl together and omg, it's such an amazing feeling and omf, I know this is dragging on and I'm sorry about that, but I love these boys, more than anybody will EVER know and I'm finally letting all of my fangirling thoughts out on this comment. #NoHateForMyFangirlism #LOL #5SOSFAM #5SOSRULE4EVA

Reason 58275181 I love Ashton
Anything Beautiful 26 июля 2014 года в 16:58 3
For a second I thought Ashton said, "He was getting TASED for his glasses." My hand just flew over my mouth to muffle my gasp. I was just thinking, "They can't really tase him for that can they?!" But then after watching it a second time, I realize he said teased. I was so relieved because the thought of Luke being tased for anything sends a chill down my spine.
bri 06 октября 2015 года в 01:33 17
I thought ash said "and he was getting tased for his glasses"
Gianne Daniella 02 февраля 2016 года в 16:28 3
In year 9 We hated each other and In Year 10 We became best friends " Michael said