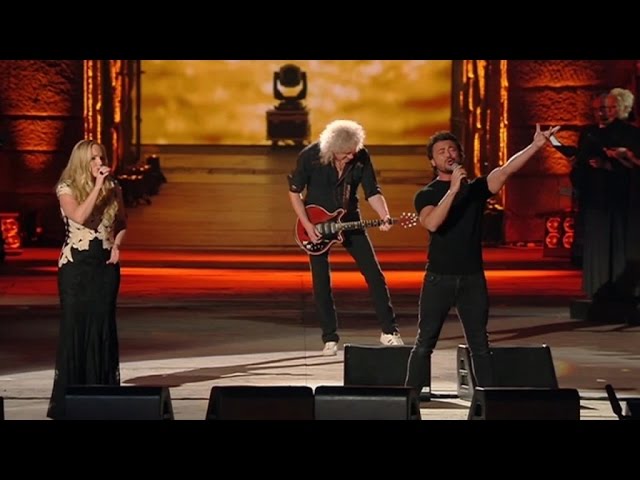 Brian May & Kerry Ellis to guest on Italy Raitre TV Parallelo Italia on September 1st ahead of February 2016 Italian Tour.

Following soon after the recent announcement of their six date Italian tour scheduled for February 2016, BRIAN MAY & KERRY ELLIS will make a rare Italian TV appearance next Tuesday, September 1, when they will appear live on Raitre TV’s Parallelo Italia, the travelling talk show hosted by Gianni Riotta airing at 21.15.

Brian and Kerry, whose regular concert and recording work together has kept them highly in demand throughout Europe, will perform songs from their albums Anthems and Acoustic By Candlelight as well as speaking about the forthcoming One Voice – The Tour! which will see them perform in major cities across Italy including Firenze, Milan and Rome early next year.
Tv show Link: http://www.paralleloitalia.rai.it/

Brian and Kerry perform five classic Queen songs; Who Wants To Live Forever, No-one But You, Somebody To Love, We Will Rock You and Bohemian Rhapsody at the beautiful Arena di Verona in Italy. Vittorio Grigolo joins Brian and Kerry for two songs, as does a choir, a gospel ensemble and a full orchestra. The concert took place on June 1st 2015 and was broadcasted on television two days later.

My other playlists:
Watch all BRIAN TALKS Episodes: http://bitly.com/briantalks
The Stereoscopic section : http://bit.ly/bm-stereoscopy

About my new YouTube channel:
The official BRIAN MAY CHANNEL is designed to carry anything on film or video that relates to me [Brian May] outside Queen — to replace all the bits and pieces of music video that are currently around out there with new highest quality versions, and fill in the gaps; and to cover under one umbrella the other areas that I operate in … Stereoscopy, Astronomy, and my animal welfare work through my charity the Save Me Trust. Each of these areas will have their own playlist on the Brian May channel. But the intended pivot of it all is the entirely new part that we’re calling Brian Talks. This section will carry current ‘to the camera’ comments, updates and communications, and I’m hoping it will be a proper ‘voice’ for me, an outlet, as well as a way of glueing together the rest of the channel.