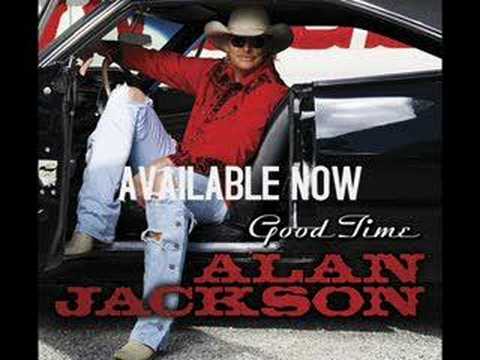 Alan Jackson sits down to talk about his new album, Good Time.

"Good Time" is a honky-tonk jam that kicks off Alan Jackson’s new Arista Nashville album for a tremendously easygoing yet edgy five minutes-plus. It’s a Friday night country tune sung by a dog-tired guy who has worked straight through the week yet doesn’t want to sleep—not now; not when "all the conditions are right," as Jackson sings, for something sweeter. The guy has cashed his check, cleaned his truck, picked up his girl across town, and as the sun goes down, he’s heading out for some fun—some beer, some Bocephus, some relief.
Jackson’s new collection—for which he wrote all seventeen songs—is named "Good Time," as well. Loose, inventive, traditional, high-spirited, sad, intense, laid-back, clear as a bell, the album is a great Alan Jackson hang. "I guess I felt like I needed something that wasn’t entirely a big, heavy album," says Jackson, whose last release, 2006’s profoundly acclaimed Like Red on a Rose, was an adventurous exploration of country-soul with producer Alison Krauss.

Marcos Pulquerio 04 мая 2008 года в 03:11 0
muito importante
Marcos Pulquerio 04 мая 2008 года в 03:10 0
muito importante
Katianna Blackmore 01 мая 2008 года в 04:12 0
I love you and your music .
The lyrics actually mean something, the
sound is great, your great, and just country
music in general. I love you .
My dad actually looks a lot like you, and
I have listened to you since I was young, I am a teenager now, but seriously, you
just are your own person, and I really look up to you . Hope you actually read this ...
Kevin Hansen 14 апреля 2008 года в 04:14 0
It's great that we still have true musicians in the world that do what they do because they love to do it. You, Alan Jackson, have been an inspiration to me because of "Who you Are", as a singer of course cause' I never met ya' personally. That would be cool. I know half of your Songs. Singer, song writer, just an all around country boy. Keep the music rollin. Also, to your 5 piece band. Ahh, band members seem to get the shade most of the time, so here is to them as well. From a noble AJ Fan.
Maurice de Rouw 28 марта 2008 года в 17:32 0
Great album Alan!! hope to see you this year at the CMA fest. greetz from the Netherlands
Maurice de Rouw 28 марта 2008 года в 17:30 0
Great Album!!! uge Allan fan from The Netherlands over here!!
See you on the CMA fest this year wheeeeeeeeee!!
tarik mes 23 марта 2008 года в 22:23 0
un grand bravot pour alan jackson tres beau albome
shadow0dancer 14 марта 2008 года в 13:33 0
I'm glad to see you back. This is your style music. Keep it up. Small Town Southern Man is # 1 on the charts. Congratulations!!!