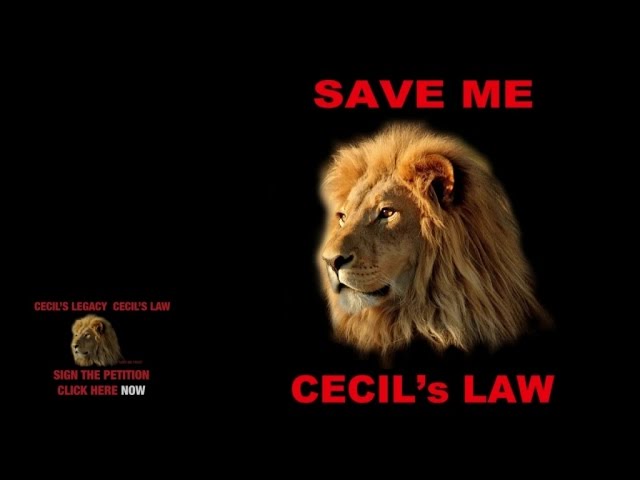 http://www.queenonline.com
Cecil’s Law http://www.savemetrust.org/our-work/cecil-s-law will stop hunters importing their gruesome trophies back to Britain. We are calling on Prime Minister David Cameron and the government to introduce legislation that would make animal heads, skins, claws and teeth contraband.

We are outraged by the illegal slaughter of Cecil, and find it despicable that Britain has allowed the importation of lion trophies with the correct paperwork. Official figures show that between 2010 and 2013 three skins, seven skulls and sixteen “trophies” arrived in the UK.
Animals everywhere are currently being abused all around the world, and, tragic as Cecil’s death was, it opened the eyes of the world to this despicable practice. Britain needs a Cecil’s Law which bans the import of animal trophies from any country, and we should stop trophy hunting in this country, too.
We were impressed that some airlines actually took it upon themselves to lead the way, by banning the transport of these trophies. All respects to them. Now we need to see our Prime Minister show leadership, by banning trophy imports. It could be done very quickly if the will is there. We believe that the British public would enthusiastically welcome such a law.
Together, we can deliver Cecil’s Law for the UK, and set an example to the world. Over 1000 lions are bred and slaughtered as trophies every year in South Africa alone, with black-maned males — such as Cecil — being the most highly prized.
Canned hunting is an industry that hides behind several deceptive fronts. Young lions, often inbred, are raised with human interaction, used for ‘cub petting’, walking and tourist “selfies” in their early days. They are fed and trained to interact with humans until fully grown when they become available for the trophy hunters. The lions, now used to routine feeding and human presence, present no challenge to the hunter who shoots them within the enclosure. They even drug the lions to make the killing easier. The ‘hunters’ only want the head and maybe the skin as trophies.
The remains of the lion, including bones, paws and claws, penis and internal body parts are then sent to the far east to be used in traditional Asian medicine such as “Lion Brew” — an alleged virility-enhancing drink containing ground lion bone.
THIS VILE INDUSTRY MUST BE STOPPED.
Please sign and share our petition today with friends, family and decision makers.

Dr Brian May & The Save Me Trust Team

Ellie Louise 10 октября 2015 года в 10:35 44
The fact the hunters have the audacity to smile in front of an animal they just killed makes me sick.
Emily Bailey 04 января 2019 года в 04:19
No conscience, SCARY! Imagine this.....murdering beautiful,wild earthlings that share this planet with us? What! How is this still possible? Poor Cecil remembers. 😥😥😥😥😥😥😥😥😥🐾🐾
Ondra Spendlik 16 августа 2018 года в 16:53
Oh, so hunting is not ok, while buying meat from a supermarket, meat of an innocent animal, living thing, which was brutally murdered for your money, which had it's life taken, just for your own comfort, that is apparently ok. I don't know what to say. You are just ridiculous. No matter if it's humane or not, it's a murder. Lions are carnivores, that's why they kill animals. No animal kills for fun, why should a human do? If animal kills, it's either for food or in self defense. Humans are not carnivores. Humans are not omnivores, they're just making omnivores from themselves. The way nature always meant it was humans being herbivores. Do monkeys eat meat? No. Do we have sharp teeth and claws like carnivores? No. Is our digestive system designated for eating meat? No. Our teeth are small and blunt, we have fingernails and our digestive system isn't fast enough to take care of meat before it starts rotting in our body. We are not supposed to eat meat. And killing for fun? Well, aren't we the most advanced species out of them all? I guess we are, when you all use it as an excuse to kill animals. Well shouldn't we then know killing is wrong? Shouldn't we have understanding of animal's feelings, needs, their pain or their rights? I could be here for another day telling you how veganism would positively impact our health and our planet, with basically no negatives. Eating meat makes absolutely no sense
Edit: The fact cats kill far more animals than we do is a total bullshit. We kill millions of animals every hour. There aren't enough cats to kill more animals than people, especially since half of the cats live somewhere where they can't even kill anything and also because most cats spend most of the day doing nothing or sleeping. Cats don't generally kill for fun. If you mean mice or occasional bird, they do it to serve their owners (because people taught them to kill)
Gool D 12 мая 2017 года в 11:49
+superskiier50 cats have an IQ of a pan
Rebecca Havard 28 февраля 2017 года в 01:54
Ellie Louise the hunters are low life predators who will get their karma
superskiier50 13 мая 2016 года в 23:49
+ddivincenzo1 cats kill far more animals for fun than we do.
lunawest 09 октября 2015 года в 23:33 15
Bravo! Dr. Bri and Kerry - beautifully done. Very apparant who the BEASTS are in this film. Petition signed!
adamfan4ever339 10 октября 2015 года в 14:02 9
Heartbreaking to watch this... I am horrified how anyone could consider this "sport"! Much love & respect to you, Brian May & Kerry Ellis for this beautiful, moving video. I applaud your efforts on behalf of animals everywhere. Hoping for an end to this insanity soon...
Matias Torres 10 октября 2015 года в 12:10 8
I can not understand those people. It is very sad to see this video :(
Markus Switzerland 10 октября 2015 года в 11:53 5
Fantastic new video with a strong message and this new version of Born Free; I love it very much! Thank you very much Dr. May and Mrs Ellis!! Many greetings from Schaffhausen/Switzerland your friend Markus Wanner
Robert Russell Composer 10 октября 2015 года в 06:31 7
I love the mix of the solo guitars with the orchestra. Simply beautiful and very poignant. :)
MichelenJeannette Boon 01 февраля 2016 года в 21:25 3
hello brian

you must look that you can,t this song born free up to the people into holland lets see and go op the good work you have my respect to ! animals have rights to ! killing for fun is not the way what god wants ......its a eco system what we needs to life togheter ........ stuppid people have we on this earth.....

Brian May & Kerry Ellis — Somebody To Love...

Brian May & Kerry Ellis performing live at the ...

Brian May & Kerry Ellis — One Voice