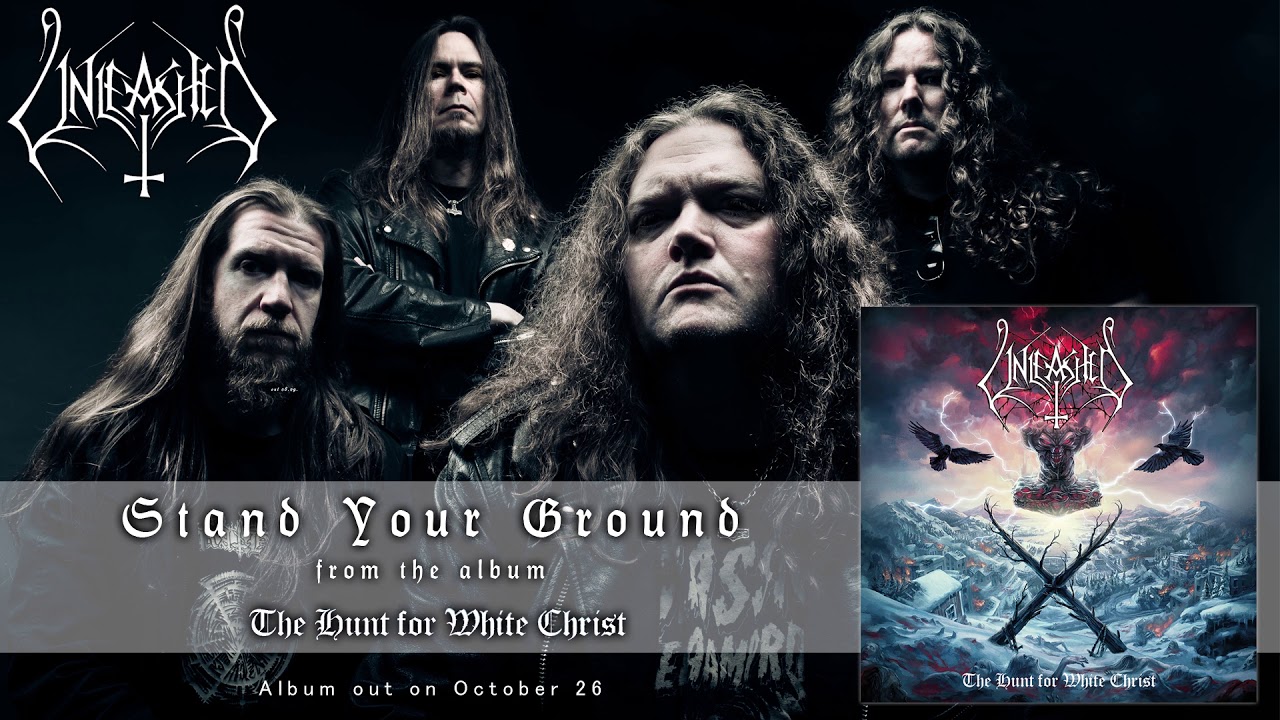 When it comes to Swedish Death Metal, the traditional Stockholm way and death metal per se, there is one band you have to mention: Unleashed! Formed in 1989 by vocalist / bass player Johnny Hedlund, Unleashed have been delivering supreme death metal from day one. Dealing with Viking traditions and values, and honing their craft, they have become extreme metal pioneers, musically and lyrically, inspiring legions of other bands with their sound.

The Hunt for White Christ is the fourth album in the continued story line of the World of Odalheim and their Midgard warriors – a story authored by Johnny Hedlund himself, comprising of the past, present, and what Hedlund’s deems as the future of the Viking traditions and values. The album was recorded in the Winter of 2018 at Chrome Studios, and does not simply mark the Swedes` 13th full-length album: it also solidifies the bands impact on history, paving the way to their 30th anniversary in 2019! Three decades of metal onslaught, and they have neither lost their bite, nor their love for pure death metal mayhem! The album opener ‘Lead us into War‘ breathes sheer aggression in conjunction with majestic undertones, followed by the blasting blizzard of ‘You Will Fall’ immediately set the scene. The album grabs you from the start and doesn’t let go, especially on, the fist-pumping future live classic, ‘The City Of Jorsala Shall Fall‘, as well as the steamrolling title track – will no doubt take any Hammer Battalion`s heart beat faster and faster! For Odin – and for Unleashed, the unchallenged kings of supreme Swedish death metal!

The Chief Vikings of Swedish death metal defending their throne!

He did not have such dilemma its just an add up to keep new converts timid, in my opinion.

mushmouth789 23 октября 2018 года в 12:56
Teo Cjan The term white christ was in opposition to Red Thor and was meant to show them as opposites. Followers of the old Norse religion during the (forced) conversion used white christ as a derogatory term to highlight some of the undesirable personality traits that followers of the new religion bestowed upon their christ.(for example meekness). This white christ figure was in opposition to the Red Thor who had much desirable personality traits that would maximise the chances of survival for the folk of that rugged place and time (for example toughness or steadfastness). So this is the origin of the term white christ. I think it partly comes from a misinterpretation of the new testament where jesus tells his followers to turn the other cheek. My understanding (and ymmv) is that this is actually a Jewish insult to the person slapping them scoffing and saying you hit like a girl, here’s my other cheek. Maybe one of our Hebrew friends can confirm or deny this interpretation.
Awiemetal36 cAwie. 23 октября 2018 года в 02:20 0
Hail to Unleashed! Greetings from KK Sabah Death Metal fans,Malaysia🇲🇾🤘🏼👊🇲🇾
Jorge Tavares 25 октября 2018 года в 03:44 0
Peso pesado😎😎😎
Frodo Hobit 09 декабря 2018 года в 16:20 0
😈😯😱🙃👻👹💀👍👌🤘🌪🌩💣📈🎧🎵🎶🎼🎸🔥💥🔊
F metalhead 26 октября 2018 года в 02:26 0
Eh
Jack Kelly 23 октября 2018 года в 04:50 2
Damn right jesus was white not jew. Hail the south and all our white brothers all over Europe.
DangaCoreMYFH 08 декабря 2018 года в 13:24
You're a dickhead lol
Freyr SeaWolf 24 ноября 2018 года в 04:08
Eric sorry Mate I forget the Slavic Gods they are Kool as to like the Finnish ones ! I’m a bit more Atlantic European oriented, would love to travel through the Slavic lands they look beautiful!
Eric 24 ноября 2018 года в 04:02
Freyr SeaWolf True. Also Slavic Perun and Baltic Perkunas is Thor/Thunor/Thunder
Freyr SeaWolf 24 ноября 2018 года в 03:29
Jesus didn’t exist the Flavian dynasty in Rome Made him up ! Pure myth ! ODIN WOTAN WODEN THOR TOR DONAR THUNOR are God’s of the Norse Saxons and Germanic Tribes ! LUGH was the Equivalent of the Gaels / Celts ! They will always the gods of Europe !
Eric 05 ноября 2018 года в 04:21
Jack Kelly Woden is the God of White men. Give up your Jewish god and come back to your tribe.